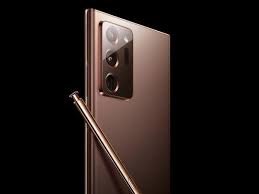 Starting with the 360-degree view, the Samsung Galaxy Note 20 has been leaked in a video showing off the phone from all sides. The device is seen to sport triple rear cameras at the back with the three image sensors sitting in one line vertically on the top left corner of the panel. The sensors sit inside a rectangular camera module with the flash placed on the side. The phone has the Samsung logo at the bottom of the back panel, and it is seen carrying a matte black finish. There is no rear or side fingerprint scanner seen on the phone, hinting at an in-display fingerprint sensor.

Up front, the Samsung Galaxy Note 20 is seen with a hole-punch display design with the cutout placed in the top centre of the display. The render suggests that the Galaxy Note 20 has a flat display with no curved edges.

The Galaxy Note 20 has been spotted on FCC as well with the model number SM-N981B. The FCC certification suggests that the phone will support 5G. The listing indicates other connectivity options like NFC support, Bluetooth v5.0, Wi-Fi 802.11ax, GPS, and more.

FCC certification site hints that the S Pen will charge wirelessly inside the phone, and the Galaxy Note 20 will measure at 161×75.2mm. The phone is also listed to support wireless charging with 9W reverse wireless charging support as well. The listing was first spotted by MySmartPrice.