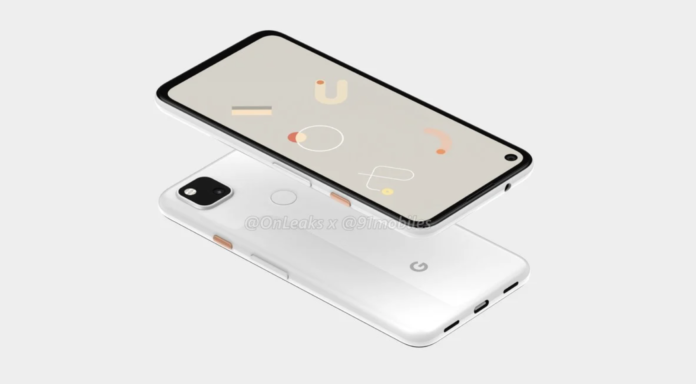 Google Pixel 4a render surfaced on the Google Canada Store briefly, revealing key design details of the upcoming phone. The Google Pixel 4a series was expected to launch at I/O developers conference in May, but due to the COVID-19 crisis, the launch never took place. The Pixel 4a has since then seen several leaks, but Google has made no hints of an official launch. This fresh render leak on the official online store probably hints that Google hasn’t given up on the Pixel 4a series, yet.

The Pixel 4a render was mistakenly listed alongside a Nest Wi-Fi carousel banner on the Google Canada Store. This listing was live for a very brief period, but The Verge was able to spot it. The google Pixel 4a render shows a hole-punch display design up front with the cutout placed on the top left corner of the screen. At the back, the Pixel 4a has a single rear camera inside a square-shaped module, that also includes an LED flash module. A rear fingerprint scanner can also be seen at the back. The Pixel 4a is seen to sport a matte black finish in this leaked render.

The display screen has the words 4 (and a half ‘A’) written, lending more weight to the legitimacy of the render. There is also the date May 12 seen on the display, in line with its Google I/O launch reports.

In any case, if Google is to launch the Pixel 4a series, it could be soon, unless it plans to push the Pixel 5 launch further as well. Google usually introduces the new Pixel flagship device at its October hardware event, but the recent COVID-19 crisis has caused several production and supply hiccups, and the possibility of a delay in launch cannot be ruled out.

The Pixel 4a was also spotted on US FCC recently and the listing suggested that the phone might come without the Soli radar sensor chip. The phone is tipped to be priced starting at $299 (roughly R. 22,600) for the 64GB model. The 128GB model is expected to be priced at $349 (roughly Rs. 26,400).